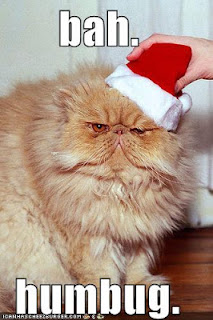 - You’ve got to admit, with that beard and that belly - he looks like the real deal.
- If by the real deal you mean an overwheight man in a read suit who is hopefully carying an ID?
- Yeah, along with lots of candykane wrappers. Though I don’t think that ID of his is going to do you much good...
- Kris Kringle, adress North Pole, that’s cute.
- Maybe he’s the real Santa, like in the Miracle on 34th street?
- Yeah but, with no happy ending. This Santa fell out of the sky around 9:30.
- From an aircraft?
- Maybe, but it wasn’t a commersial plane, I can tell you that. With a fall from high altitude we would see severe frostbite on his eyes and on his face.
- I spoke to the family, they didn’t see or hear any planes overhead.
- That doesn’t make any sense, he had to have fallen from somewhere!
- I’m sorry, are we overlooking the obvious here? He hit som turbulence, fell out of his sleigh and fell to his doom!
- Santa lying there dead. You’ve got to ask yourself: What kind of world are we living in?